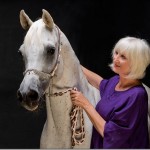 The horse is widely considered to be the most influential animal in the history of mankind, while the Arabian claims the distinction of being the most influential breed. Despite their captivating beauty, a true appreciation of these horses requires an understanding of a history spanning thousands of years and many of man’s most glorious civilizations.

The exact origins of the Arabian horse remain a mystery. Most scientists believe the Arabian horse originated in the Fertile Crescent and was a relative latecomer to the Arabian peninsula. This theory is in sharp contrast with legend and lore which generally proclaim southern Arabia to be the birthplace of the breed. Rock art throughout the peninsula, although difficult to date with precision, depicts horses with distinctly Arabian silhouettes, and continuing archeological work may yet yield evidence which further defines the source of this ancient breed.

Regardless of when these early equines arrived in Arabia, their superior characteristics developed as a result of two primary factors. The first was a harsh desert environment which necessitated many physical adaptations, including fine skin, dark eyes, large nostrils, superior lung capacity, dense bone and high tail carriage. The second was the stewardship of the bedouins, a hardy and fiercely independent peoples who became perhaps the greatest horse breeders of all time, embracing their equine companions with a passion unrivaled in human history.

The bedouin’s survival was largely made possible by the camel, an animal uniquely suited to the desert and used for transportation, meat, milk and leather. While ideal for long marches across the desert, camels were unwieldy in warfare and for the type of surprise skirmishes that were the specialty of the bedouin, there was no greater advantage than to be mounted on a fleet, enduring, and courageous Arabian horse. Reared lovingly by the members of the tribe, the Arabian horse responded to the bedouins with the loyalty and devotion that is the hallmark of their remarkable character. Over time, the bedouin breeders observed that purity was paramount in maintaining the desirable attributes of their mounts and great care was taken to ensure that only asil or pure horses were bred. Because of their nomadic lifestyle, oral traditions abounded and the geneaologies of their horses were carefully passed from generation to generation. Eventually the bedouin, who preferred mares over stallions in warfare, began to give strain names to the matriarchal lineage of their prized horses and this practice continues until the present day.

The celebrated Arab poets of pre-Islamic times immortalized their horses in verse, and their vivid descriptions illustrate the high esteem in which they held their mounts as well as the characteristics which were most highly prized – purity, nobility, bravery, beauty and stamina. From the time of the birth of the Prophet Muhammad (pbuh) the Arabian horse would be inextricably linked with the religion of Islam. The Prophet (pbuh), as the foremost lover of horses in Islam, taught his followers to honor and respect the horse. As the religion spread beyond the Arabian peninsula, the Muslims were consistently victorious on their small and hardy horses. While their foes considered their own mounts merely beasts of burden, the Muslims believed their horses were rational beings with an intrinsic understanding of morality. Two-thirds of the known world, from China to Austria, was conquered on the backs of Arabian horses.
The Arabian horse remained a symbol of nobility and splendor through a succession of Islamic dynasties. During the Abbassid period, the famed poet Al Mutannabi wrote, “the best place to be found on earth is on the back of a galloping horse…” and a treatise written by Ibn Akhi Hizam during the same period contains detailed instructions on the care and training of horses. It was during the time of Salah ad Din, however, who founded the Ayyubid dynasty and gallantly defended the region against the Crusaders, that the armies of the West first encountered the Arabian breed. The Europeans quickly learned the value of these horses in improving their indigenous breeds, and in the following centuries made innumerable journeys to the desert in search of precious bloodstock.

During the centuries of Mameluke rule in Egypt, Arabian horses were embellished with adornments of unimaginable grandeur, rivaled only by the beauty of the horses themselves. Literature and art during this period continued to reflect a devotion to Arabian horses and numerous treatises elaborated the concept of furusiyya, or horsemanship, which was elevated to an art form in this era. When Napoleon Bonaparte arrived in Egypt in 1798 he so admired the Mameluke horseman that he adorned his own Arabian horse in their fashion.

Meanwhile, the source of the choicest bloodstock continued to be the deserts of Arabia where a great empire arose in the city of Dir’iyyah. This verdant oasis of date palms in the Najd region became the capital of the longest ruling dynasty of the Arabian peninsula – the dynasty of Saud. During the 1800’s the Sauds gathered a collection of Arabian horses said to be among the finest ever to exit. W. G. Palgrave, an Englishman who was the first outsider to visit the stables of Amir Faisal Bin Turki Al Saud confirmed that the horses of Najd were a treasure beyond compare. “Never had I seen nor imagined so lovely a collection,” wrote Palgrave, “…their appearance justified all reputation, all value, all poetry.”

During the mid-sixteenth through nineteenth centuries, royal families in Europe, including Poland, Spain, and Germany established studs for the breeding of purebred Arabians and emissaries were regularly dispatched to the deserts of Arabia and the Near East to acquire new blood. The popularity of the breed increased as countless artists were inspired to depict these Eastern horses, both in their native lands and as the mounts of the aristocracy.

The celebrated stud of Abbas Pasha I of Egypt was also founded on premium bedouin sources from Arabia and consequently became of a fountainhead of beauty and type for many renowned breeding programs. Wilfrid and Lady Anne Blunt, of the famed Crabbet Stud in England, also traveled to the region in the mid-1800’s, procuring mares and stallions both from the desert and from bloodstock descended from that of Abbas Pasha. President Ulysses S. Grant of the United States was the first to import Arabians into that country, where the breed achieved an astonishing popularity.

Today, purebred Arabian horses are found throughout the world, treasured not only for their unparalleled beauty, but also for their people-oriented character, versatility under saddle, and superority in the discipline of endurance racing. All of these attributes are legacies from the bedouin breeders of centuries past, who also taught us that when these horses are regarded with respect and admiration, they respond with extraordinary loyalty and devotion.

In the Kingdom of Saudi Arabia and throughout the Arabian Gulf and Near East, great care is being taken to preserve the cultural legacy of the Arabian horse. Breeders in the region have collected horses from the finest international bloodstock and continue to garner the most prestigious show and racing titles in the world. Though modern innovations have replaced the traditional role of the Arabian horse, mankind yet owes a debt of gratitude to these magnificent animals. Many of the greatest advances of civilization, including the profound Islamic contributions in mathematics, medicine, and science, were accomplished in partnership with the Arabian horse.